Tonight I watched the mo 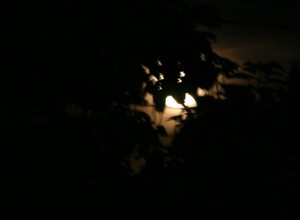 on rise in the trees. I sat on the porch in comfort with the evening breeze and a full easy moon rising. In the beginning it was a group of yellow flickering lights in a dense branch as the wind twittered the leaves. I drifted into wonder as I could now see the moon moving slowly on to other openings. Brighter lights gained strength in the flickering. Then gradually a slight arc appeared on one side as it showed a dignified curve through a larger gap. Another minute and the curve slid back behind more dark leaves. Here the moon became a constellation. I tried to count the moon stars in slowly shifting numbers… ten, fifteen, then twenty stars flashing on and off, sparkles moving higher in the sky. It sparkled like quiet fireworks. The motion of the moon… mostly lost when it sits locked in the timeless night sky. But a moonrise is a slow unfolding drama in time. And a moon rising in the trees adds a dance of light to this. I watched and waited as the moon now made its move towards final escape. The sparkling slowed and then stopped. The arc of its leading edge was coming clear of the tree. The high leaves on the top branches were now small silhouettes on the proud round stage. And then the yellow moon slipped free. And I watched one last leaf drift into the wings as the moonlit night began.