I just had a revelation this morning! Sometimes the hour when you first wake up can provide a moment of lucidity. Like being able to remember an old childhood song you used to sing with friends that ended with “… and threw her out the window.” Or finally thinking of that clever answer to a cutting remark someone made yesterday, finding just the one you should have said. Yeah. That would’ve been good.

Well this morning in the midst of my dreamy-eyed transition to wakefulness I had a revelation. It happened as I tugged on my blankets one more time to adjust the ideal temperature zone beneath those blankets, attempting to reconstitute “comfy.” I realized in a flash the answer to something that had puzzled humanity for eons. The solution to a problem so intractable and puzzling that the centuries had until now held it in rank obscurity. These things are known to appear like a flash of light to minds that have laid the diligent groundwork, or to those who just got a good night’s sleep. I will now share with you this insight which will finally answer the riddle, wrapped in enigma, and smothered in secret sauce.

Why do blankets move during the night towards the foot of the bed?

Is it restless feet pushing them down? Or, as my wife suggests…”a group of invisible blanket gnomes situated just off the foot of the bed turning tiny transparent cranks.” Or is it “Just the way it is, eat your breakfast!” These theories are each worthy as plausible conjectures. Each one creates their own path to new hypotheses and suggest fresh methods for creating tests that will either confirm or reject those hypotheses. Well, except the ones involving the gnomes and the breakfast. But my revelation this morning might just serve to detonate those steamships of postulation into tiny bits of flotsam.

Simply put, I propose a force that runs counter to normal gravity which creates movement at right angles to it. The mere presence of the human body between the mattress and the blankets releases this force which was previously latent. This force is local and has no bearing on objects outside the blankets. It is in effect only as long as the body remains on the mattress, under the blankets, in comfy repose. At this time, and under these specific circumstances, the blankets are compelled to move, in longitudinal fashion along the axis of the body and always from head to foot.

This force is undeniable. It is irresistible. It is universal. It is, after all, a blanket theory of gravity.

As further supporting evidence, I look to the understanding of centrifugal force, known to physicists as a “fictional” force because it does not force the object in motion directly away from the central axis, but instead acts like a series of forces that are tangential to the circle created by the spinning object.

So, if you are on that amusement park ride where you join a group of strangers inside a huge tin can while the floor drops away and you are pinned to the wall with no visible means of support (remember, you payed to do this), you imagine that centrifugal force is pushing you back. You are mistaken. And you should probably be riding the Tilt-a-Whirl.

I drew this picture to show how it works, along with my arrogant declaration about its meaning. I’m sure you will forgive my enthusiasm but the coffee was strong. The next step is peer review of course. 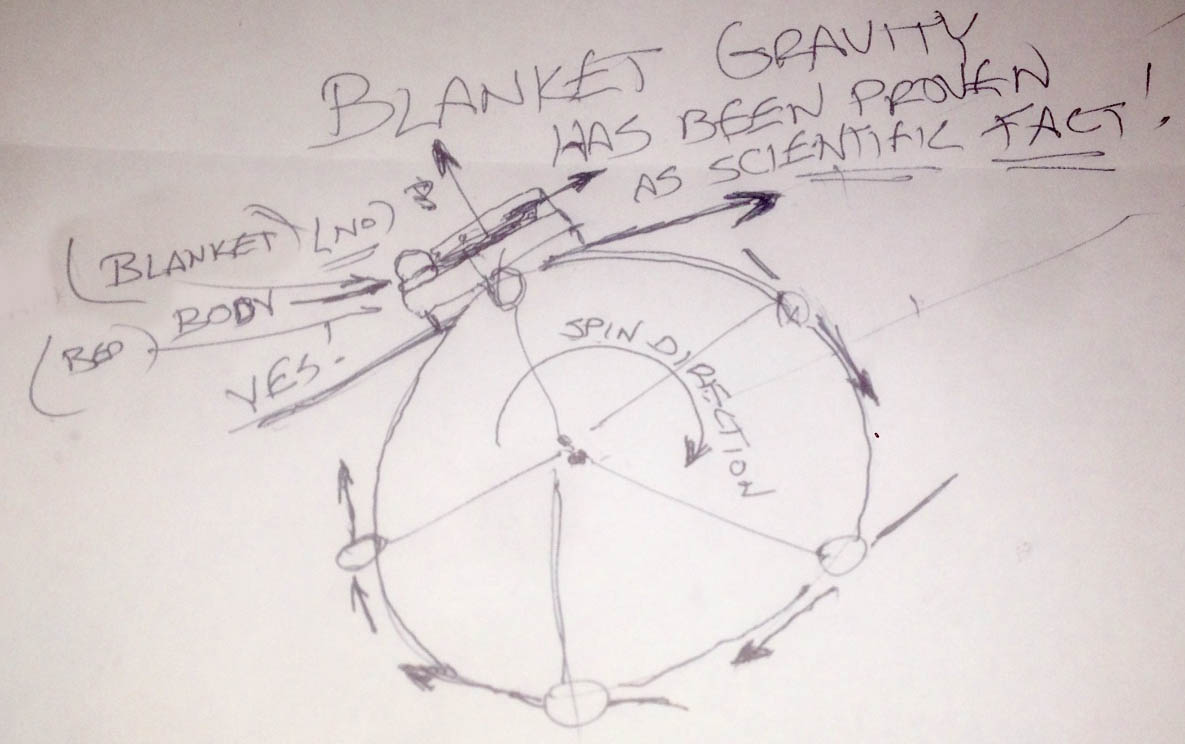