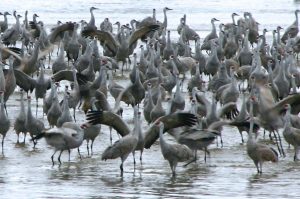 On our way up there from western Kentucky we stopped in Kansas City and visited the Truman Presidential Library in Independence. It’s a shrine to a problematic individual. This mild mannered man with poor public speaking skills and a history as a failed businessman in the hat and oil trades also bears the responsibility of the decision to kill hundreds of thousands of Japanese. There’s a weird irony in that personality making that particular decision. And the decision itself seems incomprehensible even as part of a practical expediency. A bookish Missouri farm boy becomes a presidential decision maker involving the use of atomic weapons on a civilian population, all tied to his nation’s psychology brutalized by the sufferings of war.
From there the highway north passes right in front of Leavenworth Prison which is a massive monument to the power of evil sitting in the prettiest, more benign and lovely Kansas river valley you ever saw. The walls of Leavenworth extend forty feet each direction from the ground. Forty feet up and forty feet down. Machine Gun Kelly and Bugs Moran did time there. So did Tom Pendergast after riding high for many years atop his pyramid of corruption as the Kansas City political boss and Truman mentor. The problem of evil is not just about bad guys. Good guys sometimes get into trouble just migrating through the problematic.
Let others know!